Recently, in secondary education, it seems that there has been a shift away from some subjects in favour of others. This trend had been a global issue where certain subjects such as the arts, music, drama and languages have taken a hit in favour of the more “functional” subjects such as maths and the sciences.

Now, I am not suggesting for an instant that one subject is more important than the other. Surely, in a good, balanced curriculum, there is room for everything. The maths and sciences are hugely important in training our next generation of explorers, engineers and inventors as we hopefully move towards a more technologically advanced era.

However, without certain subjects being kept alive and at the forefront of learning in our schools, we might not even get there! This is because we are living in an age where we are now making the same mistakes over and over again. Even more worrying – many of us cannot even see it!

What I am referring to here is the subject of History and our tendency towards allowing it to repeat itself. In particular, the fuel for this article came from a disgraceful cartoon recently published by the Daily Mail which depicts immigrants as rats.

There have been several bloggers who have made comments on this and it has been pushed around the social media network avidly over the past 24 hours. Many people might agree with it’s rhetoric. But whatever your views on immigration, there is no escaping the fact that this cartoon bears a horrific resemblance to those found in Nazi Germany throughout the 1930s and those aimed at the Japanese by the Americans in WW2. 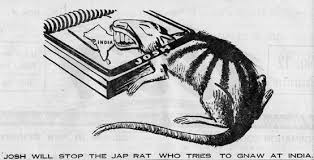 As disgraceful as this approach might be (and as ashamed as the Daily Mail should be for publishing such an image), I cannot help think that this rhetoric and imagery comes to us in our mainstream media at a time when subjects such as History are on the decline.

Surely, this serves as an argument to actually increase subjects such as history, religious education and the social sciences in an attempt to educate our young people today about how certain views are disseminated within our society and the damage they have done in the past. Moreover, history can teach us what these views can lead to. What starts off as casual racism towards a group of people turns into widespread persecution and genocide. The dehumanising of any group of people is a by-product of these views. We can look at countless case studies in history to demonstrate this.

I will save the argument about how we teach and what we teach for another day… but one thing is for sure – getting rid of subjects which help our young people recognise these types of approaches is a dangerous game and one which we play at our peril!